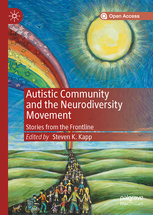 Autistic Community and the Neurodiversity Movement. Stories from the Frontline

This is a comprehensive book in which (mostly) Autistic (including non-speaking) members of the Neurodiversity Movement write about how they, and the organisations they work with, have contributed to creating a world which better caters for Autistic people’s needs.

While this book chronicles the Neurodiversity Movement, there aren’t any entries which come from outside the autism world. While the title is prefaced with ‘Autistic Community’ so this shouldn’t come as a shock, it would be good to see a similar piece of work which includes a wider range of contributions from people with other Neurodivergences (NDs). That said, there are contributors (such as Monique Craine) who have multiple NDs, therefore there is some representation.

I agree with Knapp’s decision to edit with a light touch so that each author’s style isn’t lost and NDs (such as dyslexia) are not hidden, it did mean I enjoyed reading some chapters more than others, despite each having an interesting subject matter. There were some author’s styles I just didn’t get on with, but I haven’t dropped the star rating because they held my attention, and I think that it’s a personal preference matter rather than because they were inherently ‘worse’ than the chapters I enjoyed reading more.

I learned a lot of history about the Autistic community which I didn’t know, such as the Autistic involvement in the DSM-5 revisions, and I was impressed with how involved we’ve been in some incredibly important pieces of work – truly nothing about us without us.

I was fortunate to be involved in a webinar this week hosted by the European Council of Autistic People through my director’s role with Autistic UK, and a number of authors and organisations from the book were also in attendance. I’m looking forward to working with them in the future, perhaps as we pioneer the next big positive change for Neurodivergent people in Europe.

If you’re interested in either the Autistic or Neurodiversity Movements, I highly recommend you read this book. If you’re a teacher, medic, work in government or third sector roles steering policy, or are an autism (or other ND) researcher, you *should* read this book to help you understand why we repeat: Nothing About Us Without Us.