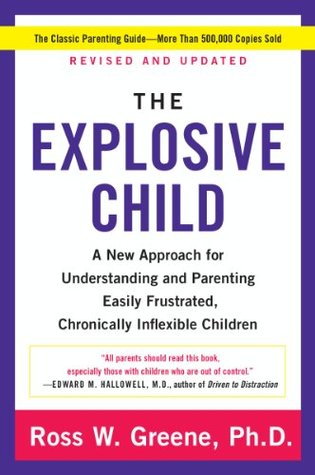 Caveat: I haven’t implemented the strategies in the book yet. When I first started reading it, my plan was to do the steps as I went along, and I did complete the first step (identifying lagging skills). However, as I was reading sections out to my partner – without the context they came in – I found I was spending a lot of time getting frustrated and defending the book as he struggled to understand the concepts without the background reading. As we need to have a whole family approach to this method, we agreed that implementation would go on hold until he has a chance to read it. I will update my review once we’ve started, and let you know if my rating has changed.

The book was recommended to me by a number of people, but I must say the title put me off a little. I advocate for neurodiversity, I’m autistic and ADHD myself and have been subjected to people calling me “dramatic” or “over-reactive” in the past. Therefore, a book called “The Explosive Child” made me think that the child was being blamed for their responses to things, rather than them being viewed as communication. However, I trust the people who recommended it to me so, over a year after buying it, I started to read. I now know why you should never judge a book by its cover (or its title).

Dr Greene makes it abundantly clear throughout the book that “kids do well if they can.” Children are not deliberately “explosive,” and that preconceived notions that children behave in certain ways to be manipulative, attention-seeking, lazy, unmotivated, etc need to be left behind. He’s also quick to clarify that parents aren’t to blame either, and that most have tried incredibly hard to help their children and only want what’s best for them. These parents have just been misguided, or haven’t had the tools to help, often while being blamed by other adults as the cause of their child’s difficulties.

So, if it’s not wilful bad behaviour, and kids will “do well if they can,” what’s the problem?

These were a complete eye opener for me. Not only do my children score incredibly highly on the lagging skills list, I do too! We are all “explosive,” we could all be termed “behaviourally challenging” (a term that Dr Greene does admit isn’t perfect, but it’s better than most of the other available ‘labels’) and I now know why. We simply (though it’s not simple to change) don’t have the skills a lot of other people have to cope with demands, problem solving, maintaining focus, handling transitions and change etc. I’m not going to list them all – you’ll have to read the book for that. I will say, however, that out of twenty-four lagging skills listed on pages 34 & 35, I have fifteen. I’m not sharing my children’s scores as it’s not my data to share, but I was shocked that I scored so highly. The good news is that by following the suggestions in the book, my lagging skills will be improved over time in conjunction with my children’s. How cool is that?

Greene goes on to discuss the “truth about consequences,” which tend to be go-to parenting strategies, and the cornerstone of unsolicited advice, usually given alongside lines such as “making a rod for your own back,” and “in my day, children got a good slap.” Needless to say, Greene asserts that traditional parenting methods using consequences and a “do as I say” attitude don’t work. Let’s face it, if they did, you wouldn’t be reading the book. There’s a lot more to it than the example I’ve given but, again, you’ll need to read the book.

Following these truths, Greene describes the three plans which parents can (though possibly shouldn’t in one case) use to address unsolved problems with their children:

Plan A – “Solving a problem unilaterally through the imposition of adult will.” Spoiler alert: this is what you’re probably doing already, and it’s unlikely to work with children (and adults) who have a number of “lagging skills.” If it did, you wouldn’t have any unsolved problems.

Plan B – “Solving a problem collaboratively.” Sorry, another spoiler: this is the whole point of the book, and the plan that you’re encouraged to follow. The rest of the book talks you though how to do this with your child – including a section on how to collaboratively problem solve with children who have little or no spoken communication.

Plan C – “Setting aside an unsolved problem, at least for now.” This isn’t “giving up.” It’s not “letting the child ‘win’.” It’s deciding that some unsolved problems are not high priorities, and they are ones you’ll come back to later. This doesn’t mean that you use Plan A for them in the interim – you literally set them aside. I know I’m going to struggle with this part, but reading the rationale behind it, I know it’s important I do it anyway.

The rest of the book talks you through Plan B: the hows, whens, whats, and whos. There’s a chapter dedicated to talking you though how Plan B would work in a school setting, and I think it’s an important book for educators to read.

The main points I’ve taken away are:

– That quote I’ve already used: “Kids do well if they can.”
– Behaviours which challenge aren’t designed to manipulate, and they’re not because a child ‘can’t be bothered’ to do what’s being asked of them.
– Plan A – the style that’s adopted by the majority of adults – doesn’t help a child solve problems more effectively.
– Plan A teaches a child that they must submit and do what they’re told at all cost.
– Plan B ensures that everyone’s needs are met.
– Unsolved problems and lagging skills are the issue, not the child or their behaviours.
– Adults need to learn how to actively listen to children.
– That just because we’ve struggled with all of this, it doesn’t mean I’m a bad parent, or that they’re bad kids.

I highly recommend this book to all parents, and those who work with children. Particularly if your child has episodes of behaviours which challenge, but actually this approach will (I think) be good for all children.

One thing (from an autistic perspective) that struck me was how opposite to ABA it is, but how it will address the same ‘issues’ (for want of a better word). Therefore, I’m going to add the book to my list of “things which are better than ABA” when I’m asked for alternatives, both from desperate parents and from argumentative people on the internet.

For ND readers: I didn’t like the phrase “behaviourally challenged” – Dr Greene doesn’t really either. However, it doesn’t affect what’s being said, and the message clearly tells me that the skills and methods presented in the book align with our philosophies. It’s not about changing a child, making them ‘fit in’, or blaming them for behaviours. It’s about collaborating so all parties have their needs met, therefore reducing the number of explosive episodes. It’s about wholeheartedly listening to the child (or adult if it’s two adults using the strategy) and being equally responsible for coming up with a solution, and nobody’s idea being considered more valuable than the other’s. If you can get past the label, and can excuse a couple of mentions of “with an Autism Spectrum Disorder,” then I think you will agree with the overarching principles, and find them a useful tool.