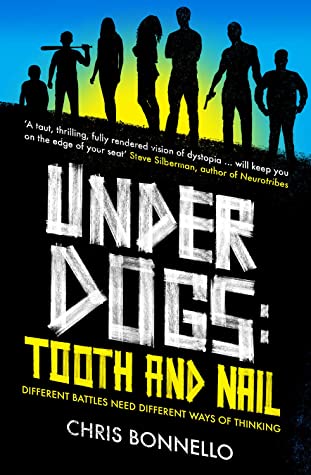 Somehow, Tooth and Nail managed to be even better than the first book in the series, and I’d already given that one five stars.

I read the first book in a day and initially thought this would be the same. I was wrong. Not because it didn’t grip me (it did); not because I didn’t want to know what was going to happen next (I did), but because I needed time to process what I was reading.

I was far more invested in the characters. I really cared about them, and I needed space to think about what they were going through before I could move on to the next part. At one point I actually rage quit because I couldn’t see something coming, and it really shook me.

I can’t write too much without inadvertently spoiling the series so far, so I’ll end with this: I wish I had the Underdogs series growing up. I love the books as an adult, but pre-teen/teen me *needed* them. I may be Kat now, but I was often Kate or Katy as a child, and Kate’s character is one I identify with strongly.

I highly recommend this series, and I can’t wait to read the final two instalments.