Recently the internet has been awash with praise and adulation for ‘brave’ Paddy McGuinness and his wife Christine since they announced their documentary about ‘being a [parent] to children with autism*.’ This has followed Paddy’s appearance on John Bishop: In Conversation With… in which (from what I’ve seen in clips posted to Facebook and feedback in the comments threads) he cries and waxes lyrical about how hard it is to ‘have two children with autism’ and ‘the fear that the youngest has autism too.’

It’s only a matter of time before I start being asked , what I think of it, or if I’m excited, but to be honest I just feel dread in the pit of my stomach mixed with a smidgen of nausea. Autism has become another commodity: the en vogue tragedy for celebrities to cash in on and it’s really uncomfortable to see. Before you cry out ‘but he’s raising awareness and is brilliant for it’ stop and read the rest of this post explaining why this sort of ‘awareness’ is incredibly damaging to the autistic community:

The wrong voices are being elevated

It’s the age-old problem faced by the autistic community: parents’ voices are raised higher and higher; they are the faces of awareness campaigns and are touted as the oracles of autism knowledge to whom new ‘autism parents’ are sent on their information gathering pilgrimages. Whilst there are a number of autistic speakers, there are very few autistic speakers who are also parents to autistic children,  who are (probably) the best placed people to speak about a range of topics relating to autism and its co- occurring conditions.

When autistic people do speak out, particularly regarding their pride about being neurodiverse, they’re quashed by the ‘autism parents’ whose chants include ‘you’re not autistic like my child, you have no right to speak for them’ and ‘you’re not autistic’ and ‘you don’t know anything about us’ followed by a sweeping statement about the autistic person implying they know everything about them based on a single (usually online) interaction. I’m not entirely sure they see the irony of elevating their non-autistic parent voices above those autistic people’s who they claim aren’t autistic enough, but there you go. The reason they tend to elevate other allistic parents’ above autistic voices leads me into the next point… 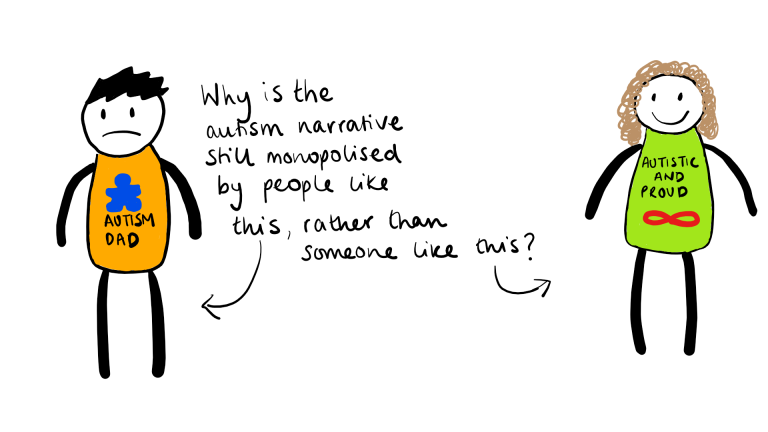 Okay, always may be a bit hyperbolic, but not much. The voices being lauded are bellowing out about how hard autism is, how it ruins lives, how they wouldn’t wish it on anyone. That alone is enough to make even this emetophobe want to vomit, but what’s worse is they’re not even talking about the autistic person in these cases; they’re talking about themselves! The parents! Autism is hard for them, their lives are ruined, the child they imagined having was ‘stolen by autism.’ There is seemingly no consideration for the autistic person themselves who may, in fact, be completely happy with their lot. Or perhaps they are struggling with co-occurring conditions such as anxiety, depression, or learning disabilities, but that doesn’t make the autistic life any less valid or valuable, and it certainly doesn’t give their family permission to publicly cry ‘woe is me’ in order to gain fame, money, validation, or all three.

Many of the ‘autism parents’ are so wrapped up in their version of what autism is, they forgot to find out what the objective reality is. It’s a life-long neurodevelopmental condition affecting social communication. The most common traits include a need for routine and stability, sensory processing differences (although this isn’t a diagnostic criteria), social communication difficulties (with many autistic people having speech and language delays), and difficulties with executive function. Autism isn’t a learning disability (although there are lots of autistic people who also have a learning disability), it’s not something you grow out of, and it’s certainly not caused by vaccinations (I actually can’t believe I still have to write that one). Functioning labels have never been part of the diagnostic process, and the reason that support levels have been introduced in the DSM-5 is to easily identify those who have significant disability caused by another condition the person has, e.g. a learning disability.

Verbal ability and intelligence do not mean that an autistic person has it easy and is just ‘quirky’.

Going back to ‘you’re not autistic enough’ and the other tripe spouted by ‘autism parents’ online and in articles: just because someone can write a blog post or compose a tweet, it doesn’t mean they are less autistic. It doesn’t work like that! In fact, if you insist on using an arbitrary scale of ‘autisticness’ with only the non-verbal autistics having a valid diagnosis, you should know that many of those tweets and blog posts come from non-verbal autistic adults (and probably should let psychiatrists, paediatricians and professors know that you can diagnose, or more specifically remove their diagnosis, based on a single online interaction as you’ll save them a lot of time and money; you must be so smart!)

There are a host of other reasons I feel uncomfortable with the current ‘awareness’ shows and campaigns, but the three points I’ve covered are the main ones. Instead of yet another celebrity talking about how hard their life is because they have autistic children, or an infographic written by Autism Mom 37 about how vaccines stole her child and the only way to cure them is to shove bleach up their backsides while removing all gluten and casein from their diets, why not have a television programme about a family where all members are autistic? Show the highs and the lows (I’m not going to pretend it’s all sunshine and rainbows, but at least listen to why it’s not from an actually autistic person); capture the joy of a family stimming together while sharing their special interests; portray the difficulties faced when all members have sensory differences that clash, and the ingenious ways they get around that; show real life as an autistic person, and stop lifting up the wrong voices. And for the umpteenth time: please call us autistic, we don’t carry autism with us and we’re pretty fed up of having to ask you to use the correct language.

Autistics all have a voice, are you willing to listen?

*Deliberately used person first language here as this is how the programme is being described. It should have been the first alarm bell really.