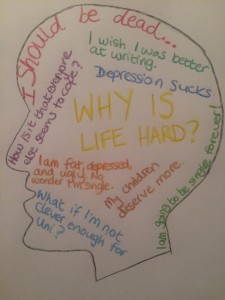 On Monday 10th August 2015, I made the decision to end my life. I had been falling into the downward spiral of depression for a few days, my mood gradually deteriorating, coming to a dangerous head on that day. The most difficult thing is when people ask why. “What has brought this on?” “You seemed so much better than last year.” “I thought you were better…” I can’t pinpoint a specific thought or event which has contributed to how I feel, and frankly, I don’t need to. Depression is a clever illness: it remains hidden, masked by good times and medication. You start to think that maybe, just maybe, you can live a “normal” life. People ask you how you feel, and you’re surprised when you can answer with “actually, I’m good!” It comes for you when you least expect it, when your guard is completely down, for me, it was when I was in Rome celebrating my 30th birthday.

I was in a beautiful country, with my best friend, having a wonderful time. We saw the Colosseum; the Pantheon; the Vatican, including the famous Raphael Rooms and Sistine Chapel; the Trevi Fountain (although that was a major disappointment for me, as it was being renovated); and the Roman Forum. We ate spectacular food, had amazing gelato, and our hotel had a pool on its roof which overlooked the Colosseum. I was having the best holiday of my life, and yet I felt numb. I was loving it, but my anxiety was starting to take over.

I’m a terrible flier; I am extremely scared of flying in a plane, and I’m even more scared of not being in control. This makes me an anxious bundle of nerves, which in turn makes me a horrible person. I’d warned Dan about this before the holiday was booked, and he was suitably prepared for it. I was snappy, controlling, and had to stick to timings and “rules” exactly. When Dan needed to go to the bathroom, it stressed me out. When our boarding time coincided with Dan being mid pee, I inwardly freaked out. In my head the plane was definitely going to go without us, we were going to be stranded in Gatwick airport, or worse, our names were going to be called over the Tannoy. Of course, these thoughts were all completely irrational, and there was part of my mind which acknowledged this amongst the panic. We made it to the plane in plenty of time, and arrived in Rome a few hours later, albeit with Dan only having feeling left in one of his arms.

My anxiety only grew in Italy. We went on guided tours, and I was more concerned with keeping up with the guide, and making sure his umbrella was always in sight (the favoured method of identification amongst Italian tour guides), that I almost forgot to enjoy what we were looking at. The time spent in the Vatican in particular was too short, too rushed, and too stressed. It was beautiful, and I don’t regret going for a minute, but all these little things which would irritate other people at most, were taking their toll on my mental state.

The journey back to Britain was no better than our outward one, if anything my anxiety and general “Kat is being a complete nightmare” controlling, snappy self were worse on the way back.  Due to the language barrier and the inability for people to have any job knowledge outside their immediate role, we went to three different boarding gates before we arrived at the correct one. At this point, Dan could see how stressed I was getting, and kindly offered to be the person to worry about finding the gate, and said that I could just “worry about following him”. My response to this was to all but shout at him, telling him I was on a knife edge, about to fall into meltdown and that I needed to be in control of one thing, and the only thing I could control was finding the fucking gate.

An anxious plane ride, navigation of Heathrow airport, and coach ride later, we were back in Cardiff. Things were going to go back to normal, and I had the rest of the summer holidays to look forward to with the boys. While looking through photos from holiday, I was overcome with self-loathing and disgust at how fat I have become. I have absolutely no control when it comes to eating, it seems that I can either starve myself, or be fat; I don’t have a happy medium. On 5th August, I self-harmed for the first time in at least six months. I cut my arm twice using a pair of hairdressing scissors which were slightly blunt, and more than slightly rusty. I didn’t clean it, because I didn’t care if I got an infection, part of me would have welcomed it as a way to hide away from the world for a while. My friend Paul came over and kept me company, although I didn’t admit to him that I’d self-harmed that day.

The following five days went by in a blur of barely coping, and self-loathing. I would take the boys to Dan’s house so I could sleep, as it was impossible for me to stay awake for the whole day. I was ensuring the boys were clean, dressed, fed, watered, and entertained; but that was all I could manage. I wasn’t doing anything for myself, I couldn’t even concentrate on reading books, so would spend the early hours when I couldn’t sleep reading graphic novels, and chatting on Facebook to Bethan, Paul and Dan; collectively Team Dinosawful. I wanted to disappear, feelings of despair and sadness turned into worthlessness and numbness.

On Monday 10th August, I had come to the conclusion it was better for me, my family, my friends, the world, if I were to die. I had the boys at my house until the Saturday, so I planned to wait until then, when I knew they were safe with their dad, take the contents of my medicine cabinet, fall asleep, and never wake up. I had been at Dan’s house, I had no concentration span, no patience, and no connection with the world and people around me. Aaron accidentally hurt me by clambering all over me; I snapped and hit him on his arm. It wasn’t enough to even make the area slightly pink, but I felt immediately guilty, and wish I didn’t exist. I ran into Dan’s kitchen crying, grabbed a knife out of a drawer, went into his bathroom and cut myself. I stayed in the bathroom for a little while, sobbing uncontrollably.

When I finished crying, I calmly left the bathroom, washed up the knife, and went back into the bedroom. I found out what everyone wanted for lunch and made it. I had a coffee, chatted with Dan, distracted the children, and continued the afternoon in the usual manner. I had already decided what I was going to do. Before I left for home, I stripped Dan’s bedsheets and changed his bedding. I wanted to do one last useful thing for him before I died.

On my way home, I messaged Team Dinosawful. I knew I needed to cook dinner for the boys, but didn’t know what to do. I knew anything I cooked with I was going to use to burn myself, and said so in one of my posts. Paul and Bethan came over, made dinner for the boys and helped me bath and put them to bed. While the boys were asleep, I admitted my plan and told them my timeline. That night the contents of my medicine cabinet were stripped and taken to Dan’s house and Bethan moved in.

Bethan looked after the boys while Dan and I went to the doctor. I told my GP the plan and timeline, he put me on Mirtazapine. I was told I wasn’t allowed to be alone until at least the Sunday, and that I was to go back on Friday to discuss how I was feeling regarding ending my life. The Mirtazapine has made me ridiculously sleepy. One evening, I started to run a bath for the boys, and then went into my bedroom to talk to Bethan and Paul. I completely spaced out, and it wasn’t until Bethan asked if it was about time we bathed the boys that I remembered I had already started running it. I opened the bathroom door and was greeted by a flood. The bath had overflowed, the bathroom floor was completely covered in water and it flowed onto my hallway carpet. It took the entire contents of my towel box to clean up, the boys had to wait until the morning to have a bath.

When I went back to the doctor on Friday, I felt that I wasn’t quite as actively suicidal, but was very glad to have company. I told him that I knew I wouldn’t have coped over the past few days without Bethan and the rest of the team. I spent most of my time asleep, in a medically induced slumber; and the times I was awake, I was about as much use as a chocolate teapot.

It’s now Monday, and Bethan is still living with me. Saturday was spent with the team, we went to the cinema, had dinner, and generally kept each other company. I was sick at one point, and a walk for Bethan wasn’t the respite she craved, but we are all still here. I’m still here.

I still don’t want to be here, but I am more passively thinking that I wouldn’t care if something did happen to me, rather than actively looking to kill myself. My medicine cabinet is still empty, and it needs to remain that way for a good while yet. When I’ve been in shops (accompanied, as apart from when I pee, I’ve not been alone since last Monday) and I see the medication aisle, I am very tempted, and the thoughts come back louder than ever.

I feel detached from the world, and think that everyone would be better off if I didn’t exist. I can reason with myself logically, but it doesn’t stop my brain thinking what it thinks. Mental health issues are not self-inflicted, you can’t control them, and they are just as serious, if not more so, than many physical illnesses. I know my boys need a mother, I know that it doesn’t just mean a person who will feed, care for them, and make sure they get to school on time. I know it means they need me. It doesn’t stop me from being tired of it all though. I’m tired of having to say I’m okay to most people I know. I’m tired of having depression, something I’ve battled with for over half my life. I get to the point where I’m (irrationally) jealous of people with Bipolar Disorder; at least they get highs.

My life is currently completely on hold. I can’t drive due to my medication, I’m too tired to be active, and I struggle to leave the house. I’m extremely lucky to have such understanding friends who have helped me enormously this past week. I wouldn’t be here without them, and they care for my boys like they are their own. I try and make sure I do positive things which affect my future, as a way of ensuring I still have one. I have completed my university registration, and have bought this year’s set texts. My head is still a cacophony of negative thoughts and emotions, something which I am fed up of having to justify or explain. I can only hope that I will get better, that my GP remains as sympathetic as he is, and my friends remain as supportive.

I should be dead, but I’m not, and it’s one of the hardest things I’ve done.